Words, like moths, are captured by writers who pin them to the page in various forms. What writer’s work most deftly captivates you? Why?

Difficult, difficult choice. However, I think I’ll go with Emily Dickinson, whose poetry captivated me from the very first encounter. Here are a few favorites:

Much Madness is divinest Sense

Much Madness is divinest Sense —
To a discerning Eye —
Much Sense — the starkest Madness —
’Tis the Majority
In this, as All, prevail —
Assent — and you are sane —
Demur — you’re straightway dangerous —
And handled with a Chain —

“Hope” is the thing with feathers

“Hope” is the thing with feathers –
That perches in the soul –
And sings the tune without the words –
And never stops – at all –
And sweetest – in the Gale – is heard –
And sore must be the storm –
That could abash the little Bird
That kept so many warm –
I’ve heard it in the chillest land –
And on the strangest Sea –
Yet – never – in Extremity,
It asked a crumb – of me.

The Bustle in a House 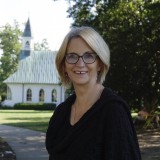